“The dinner parties given by the Kiernanders were famous for their profusion of dishes and their brilliance.”  Biren Roy, Calcutta, 1481-1981: Marshes to Metropolis. (1982)

The above quote was written in reference to Rev. Johann Zachariah Kiernander (1711-99) and his third wife Ann, whose elaborate “banquets and wine were famous in England” in the latter half of the eighteenth century.  But it would also serve to describe the great feasts prepared more recently by my grandparents, and in particular my grandfather, George Albert Kiernander (1926-2006).

At home among his books, including Hobson-Jobson.

Having lived across the length and breadth of what is now India, Pakistan and Bangladesh my grandfather was quite the authority on the food of the subcontinant.  He was born in Calcutta and there, in that hotchpotch city of many tongues, he acquired the palate that would inform his cooking in years to come.   When, on one of our many Thursday evening visits, he produced the greatest vegetable curry I’ve ever eaten it was, he revealed, the addition of ‘a touch of soy sauce’ that elevated the dish; and this secret he had learned long ago in his cosmopolitan hometown, Calcutta.

Rising to the rank of Deputy Chief of the General Staff in the Pakistan Army had not given him much opportunity to cook during his working life, but tastes and recipes acquired from Balouchistan to Chittagong, at tribal feasts and official dinners, and from the many khansamas at home, were reborn in his retirement.  Curries, dhals, pulaos, breads, chutneys, salads would all be served up to his adoring family in such quantities that the dining table would strain with the weight of it all.  I cannot recall a dish of his that has been bettered, nor one which was not perfection itself.  Jhalfrazee, Pork Vindaloo, Murgh Musallam, Tarka Dhal, Yakhni Pulao, Aloo Barta, parathas were just some of his specialities.  And if you really couldn’t get enough of a dish (I ate so much I could never sleep on Thursday nights) he would write you his recipe and post it to you the next day.

One versatile recipe I treasure and make regularly is for Khicheri, or as Hobson-Jobson has it,

“KEDGEREE, KITCHERY, s. Hind. khichri. a mess of rice, cooked with butter and dal (see DHALL), and flavoured with a little spice, shred onion, and the like; a common dish all over India, and often served at Anglo-Indian breakfast tables, in which very old precedent is followed… The word appears to have been applied metaphorically to mixtures of sundry kinds, and also to mixt jargon or lingua franca.”

This recipe is an appropriate choice, then, as my grandfather spoke in the most wonderful ‘kitchery’ himself.  He was a great and knowledgeable raconteur, and his tales were always peppered with a whole range of Anglo-Indian idioms, now falling from usage.

This is the very simplist of all his recipes, and he would more often than not add vegetables, spice powders, and chillies to his khicheri. 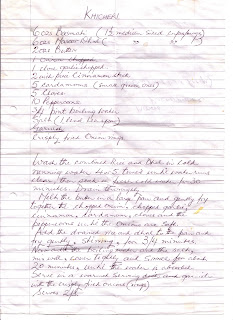 I usually add haldi, fresh green chilli, dried red chillies, a little Sri Lankan roasted curry powder, curry leaves and cubed potato to my take on it.  As he would say, ‘very delicious’.  Eating this, and thinking of you Grandpa! 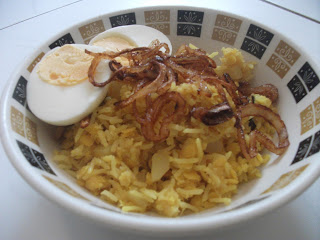